Rest Areas or Free Camps?  The Facts and the Fiction

In this, the first of a three part series, Keith Thompson looks at how we, as travellers, should treat and respect the various type of roadside stops. A typically “busy” overnight stop on the Bruce Highway.

Those of us who travel all the time, or those who make that annual journey, often need that roadside stop for the night; away from a traditional campground or Caravan Park.  Many of us use these areas to gradually “hop” along greater distances without the need of the facilities of a formal Park. Unfortunately there is much misinformation and misconception about the role and use of roadside Rest Areas (or whatever they are called in various States).

There are some common threads, but even though the rules vary State by State, we hope to clarify (at least in part) this situation here.  Let me start by saying that Free Range Camping, as well as other responsible web directories, and the publishers of the most used printed directories, all take great care that we all publish only legally approved, or allowed, camping locations**.  Unfortunately the unchecked listing via some well used Apps and forums are further confusing the issue by not following the basic principal of “is this legal?”.

Which brings us to the first, and often confusing definition – “CAMPING”; here is a typically confusing sign, often seen in Queensland: 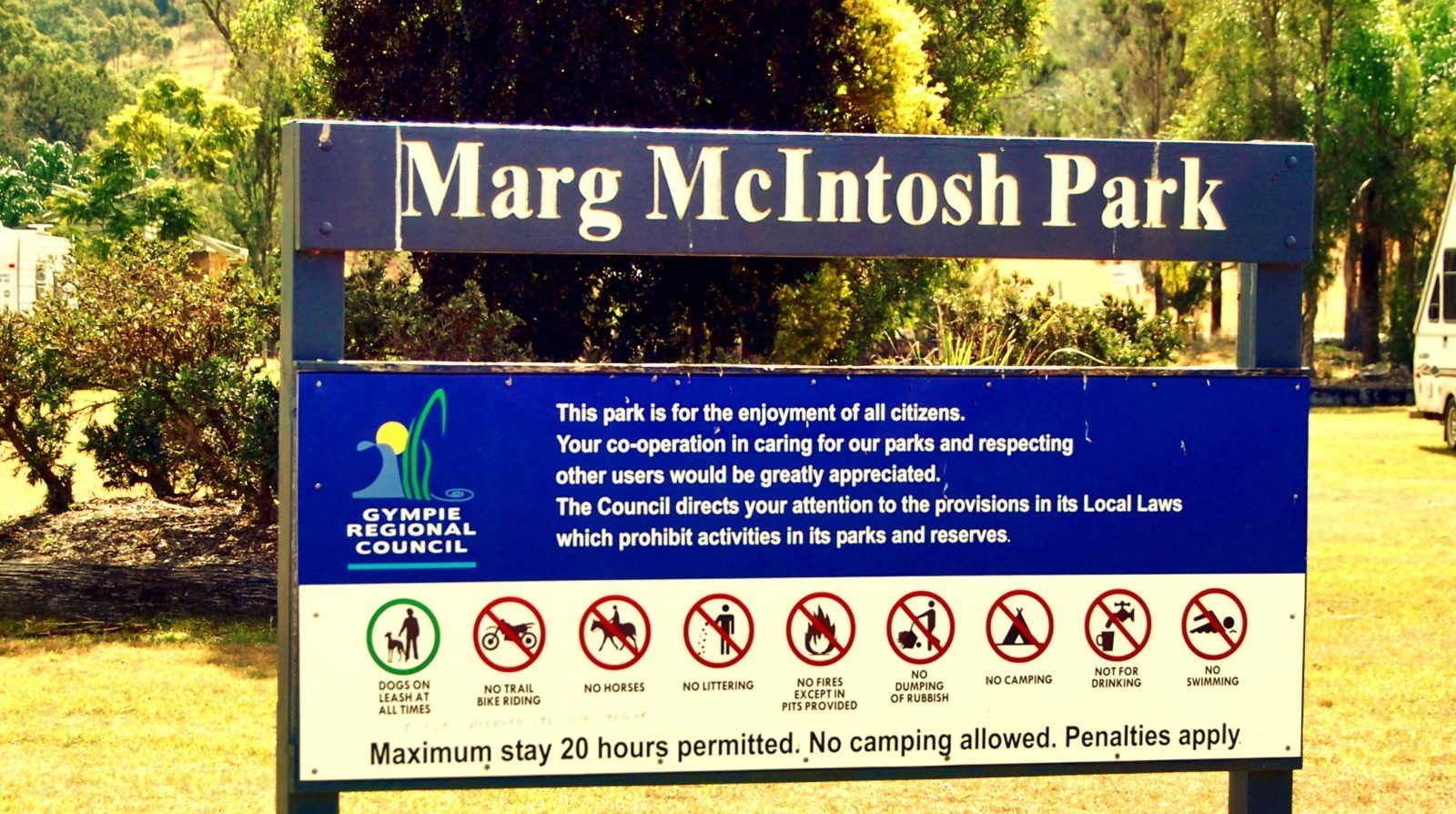 “Maximum stay 20 hours” but “No Camping…”.  Clearly, at least at this location, sleeping in your RV is not camping, but the use of a tent is (is that obvious?)  What about a camper trailer?  Or a roof topper?  I am afraid we don’t have the answer to that little conundrum but we at FRC do try to follow other information on a particular site if we find it, especially regarding camper trailers which we separately specifiy in our listings.

This broad definition would lead you to believe that a “No Camping” sign alone at a Rest Area only applies to Tents (and their like) but is that the truth? In later parts of this series we will look at the variations in this particular bit of terminology…but for now an overview:

There are several common designations used throughout the country and as a general observation overnight stopping is not permitted in those which are termed “Stopping Bay” or “Parking Bay”.  Those designated as “Rest Area” are the ones most likely to allow stopping for a specified maximum period.

There are several common designations used throughout the country and as a general observation overnight stopping is not permitted in those which are termed “Stopping Bay” or “Parking Bay”.  Those designated as “Rest Area” are the ones most likely to allow stopping for a specified maximum period.

Each State has their own regulations, or lack thereof, regarding the use of the various types of roadside areas, there is one reasonably universal rule though, that relating to Truck Rest and Parking Areas.  If marked with ONLY a truck sign, similar to this

then, in some states at least, it is prohibited to even enter the area in any other vehicle except in a genuine emergency (not fatigue management other than Trucks).  This rule usually does not apply if the location is also signed in advance as “Rest Area” and has other facilities (Toilets, tables etc.) as well as the Truck sign, although this does vary by State.

This is a direct quote from NSWRMS:

These “Truck Only” areas are essential for our truck drivers to take these mandatory breaks from driving to which the rest of us are not subjected.  In some states both Police and Transport Inspectors can issue on the spot fines for just being in a Truck Bay – so beware! Note that this equally applies to other areas for trucks only which may be designated “Road Train Assembly Area” or “Truck Inspection Bay” etc.

Western Australia has more recently (since this article was first written) issued the following statement regarding “Truck Bays”:

Note that very few Rest Areas in WA are actually signed as “Heavy Vehicle Rest Areas” so perhaps the definition is a little moot?

You should note here that, as far as we have been able, Free Range Camping does not include Truck Only areas in our Rest Area category listings.

It is equally important where areas are shared with trucks that we leave the large open spaces at the front (roadside) for the trucks to safely enter and exit, please remember if you are in Road Train areas that these require a lot of room!  The writer recently saw 2 caravans in a Road Train rest area in Queensland who had both pulled up in the middle of the area for a lunch break, and had entered from the wrong end – PLEASE People!

This is a good example of a responsibly shared site which is not very big (near Winton) with the caravans keeping to the rear: 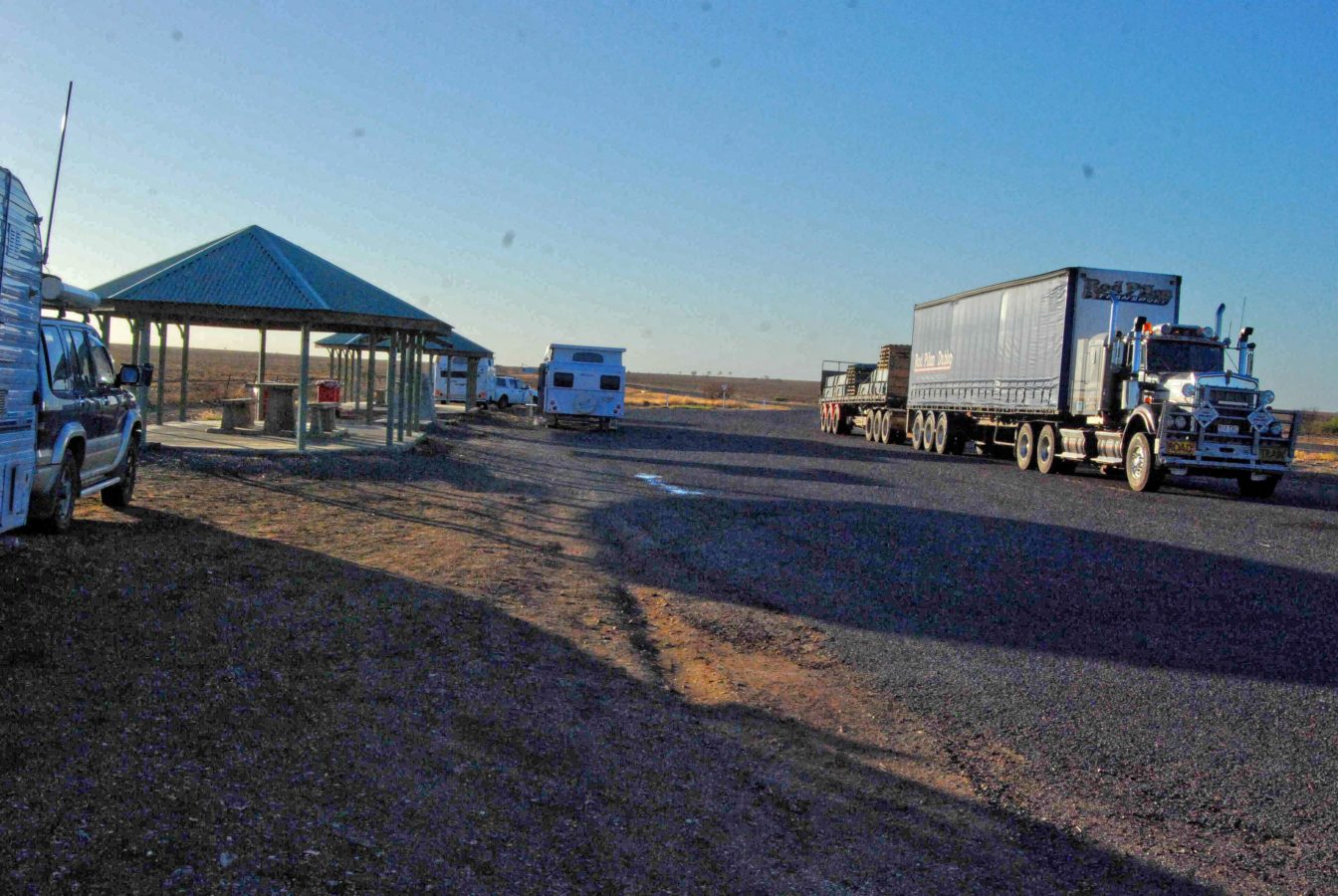 In Part Two of this series we will examine the variations between States; who has the clearest regulations and where the rules are rather “Grey”.  Until then, safe driving (and resting).

Disclaimer: Any information contained in this article which may imply a legal requirement is sourced from freely available published documentation from various relevant authorities.

This Article was published in Free Range Camping in November 2017 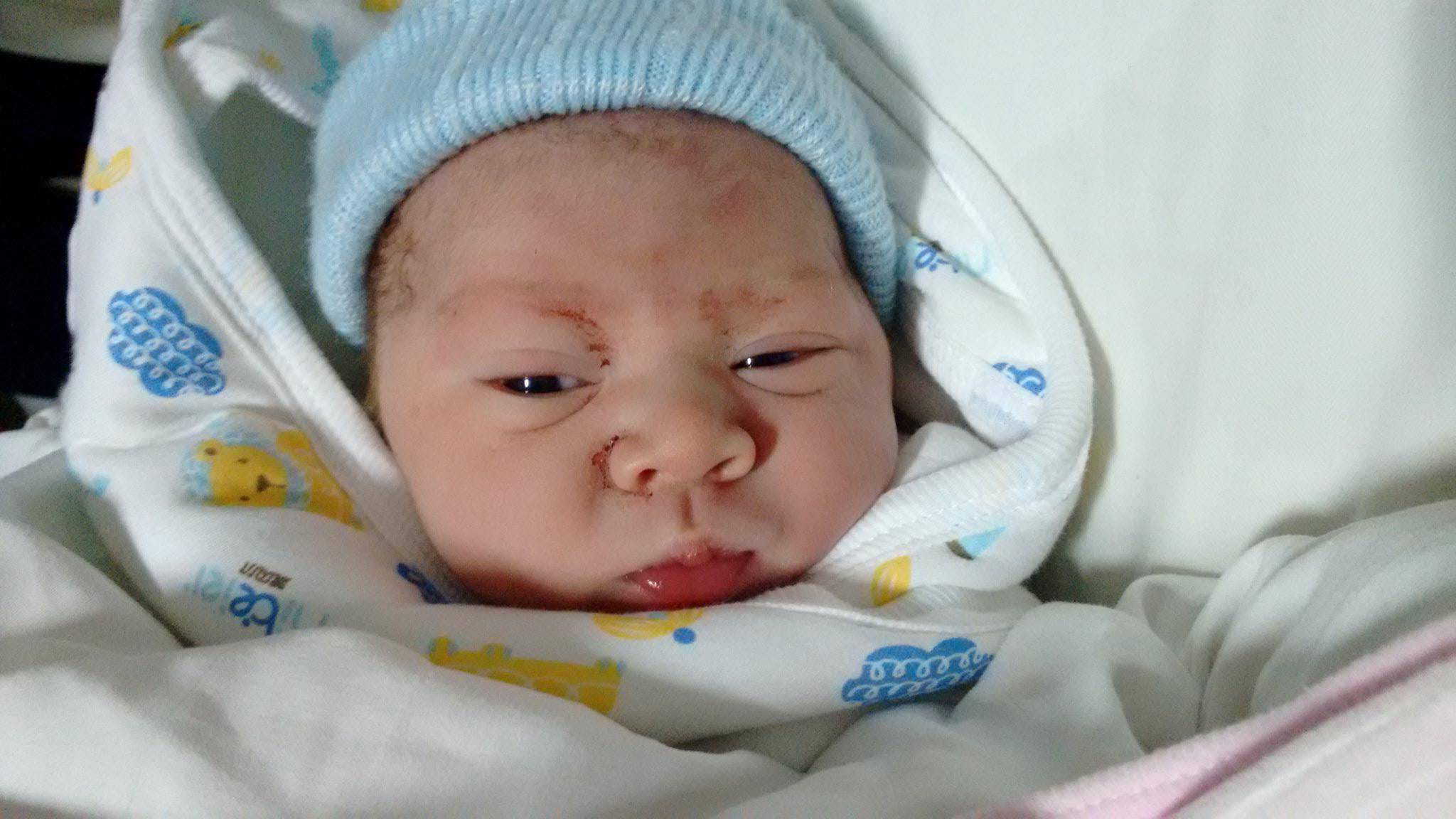 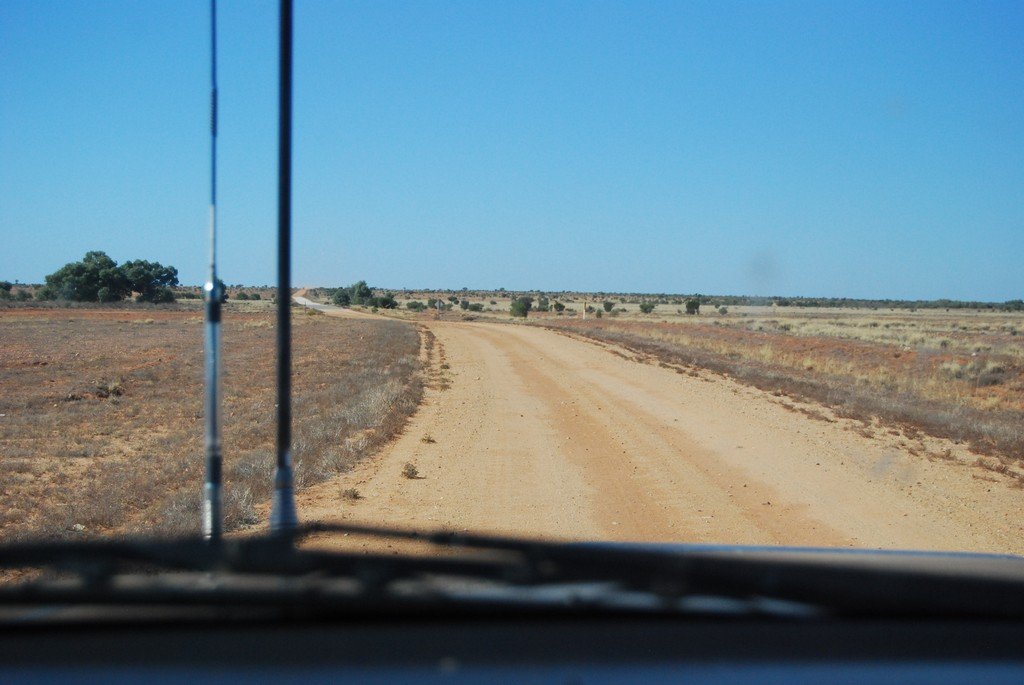 Five Years On! – The Journey So Far 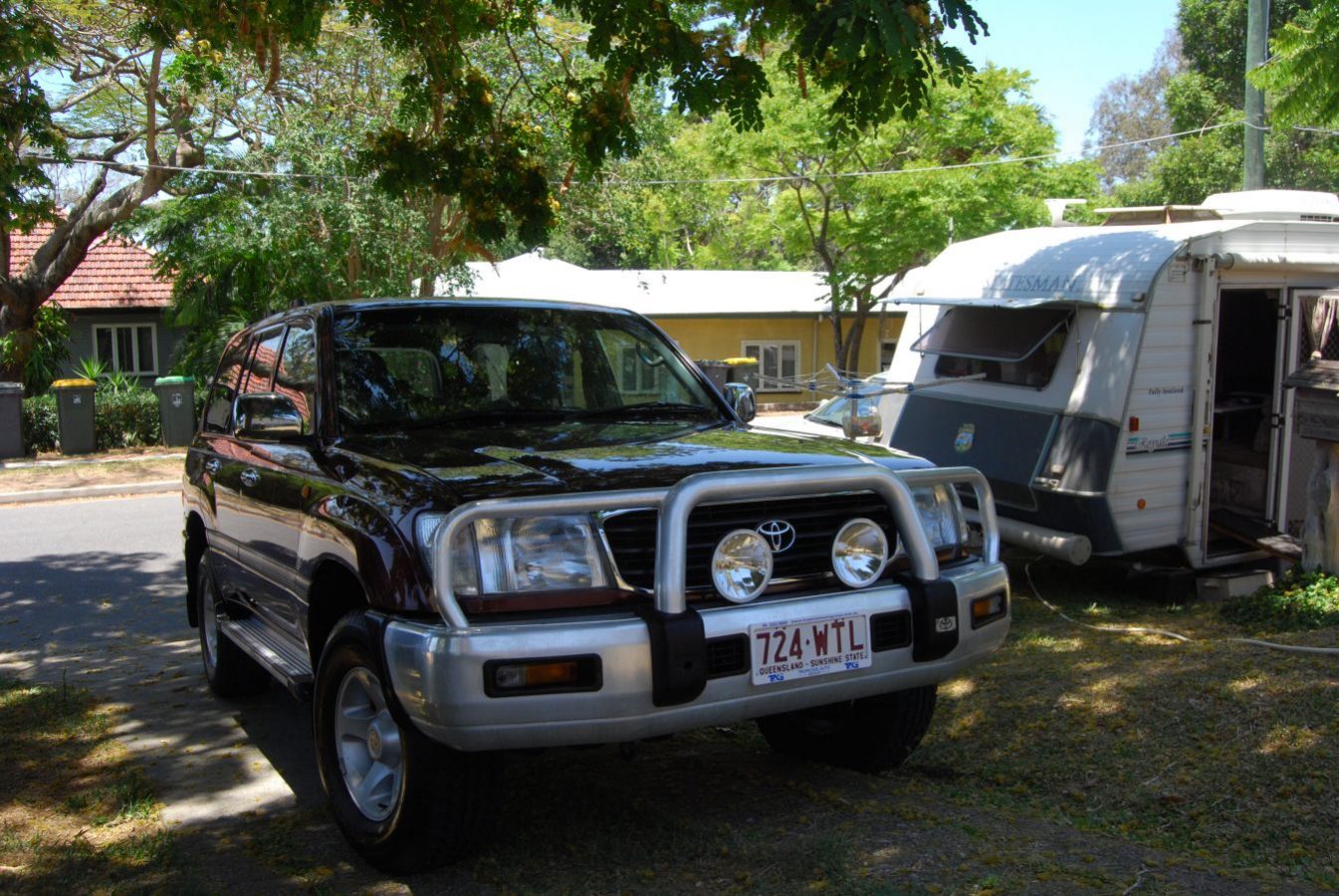 Brisbane and a change of Vehicle